Kick in the Pants!

Today I thought I'd just talk about a bunch of my blogging pals....and link to their sites so you can check em out! Most of them are like me, would be lucky to have 5 or 6 daily readers......and so, I'm not saying that their blogs are fabulous, although you might think so....what I am saying is, that with a little encouragement, and traffic, these blogs could develop into something more....well they could get addicted to blogging like the rest of us, and we could get more out of them! (And, I'm also not saying that my blog is fantastic, cuz it's not, its just well, average!) 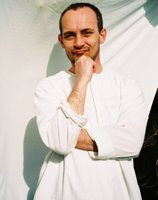 Firstly, I'd like to introduce you to my pal, Ian, who's blog is called Escape From Fortress Guinness. When he's not out chasing the ladies, he can be found at the local library in Liverpool, where he works. He's also a fine bass player, although at this time, his axe is probably covered with a thick layer of dust! Ian is such a blog slacker, but he writes good stuff, that I thought you could go over there and give him a good kick in the kecks, and perhaps that'll inspire him to post more often! 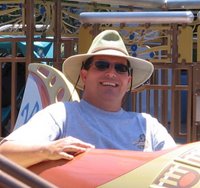 Secondly, we have Steve. Now, some of you may remember Steve, from my blog, wayyyy back, when I told the story of our very first date, in high school. That's right, Steve, over at Sideways Again, was my very first boyfriend! He likes to write film and music reviews, and he could also use a few visitors over at his blog....that might get him inspired! (and yeah, this will date us, but I've known him for 28 years!) 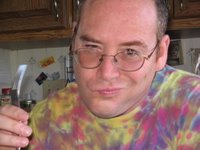 Most of you have already met Mr Ratburn, over at My Own Personal Torture. What some of you might not know is, that Mr Ratburn is a real live high school teacher, and Mr Ratburn from the Arthur the Aardvark stories, is his hero. Mr Ratburn only posts HNT's, but they are all funny, and if you are into man nipple, this is the place to go! (the nipples are mine, though, cuz oh, I almost forgot to tell you, Mr Ratburn is my husband!) 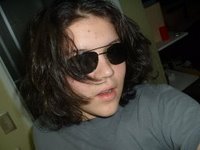 Moving on, we have a really special gal with a blog called Shoot Boy. The first time I ever read a comment from this blog, with it's grotesque photo of a bloody faced man, I was completely disgusted. Then I realized, hey, this is my very own little niece, Aubrey! She has since lost the bloody faced man pic! Aubrey doesn't post much, in fact it's been awhile, but, I really want to encourage her to blog more....be polite, she's just 19.......she's super cool, an artist, and wants to study psychology. Go over there and pester her to blog more!

Ok that's all for now...I'll do more next week! Now go out there and check these people out! They are all cool!
Posted by S at 6:43 PM

aaw, and here I thought when you said Ian you meant me :(

cool , thanks for the links !

I have been to a ton of blogs and I think yours is definately not just average. I hate to say this, but to me the average blog is not worth visiting more than once. Yours is definately worth coming back to. For one thing, you have lots of nice pics. For another, your sense of humor comes shining
through. Also, you write very well.

great idea, suse! i went and kicked ianin the kecks, he needs it anyway, hehehe

I'll do my best! BTW I am loving your HNT pea-pod outfit!

...it was a pleasure BFM...after all you are kind enough to regularly visit my HNT's! I've linked you, BTW.

OH SNAP now i am famous

Thanks for the promo. It's nice when people stop by my blog for a visit--it's like making new friends. Your blog is definitely the one that most other blogs should aspire to. I know I mine does. It's nice to be back ;-)