What Makes You Think An Ant Can't? 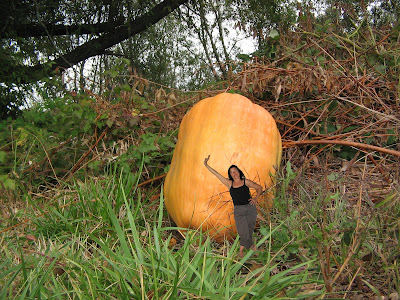 I'm out standin' in my field! 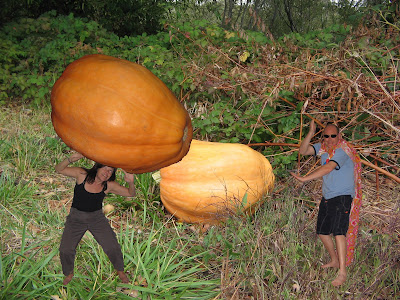 Some of you have already seen these pics but Bryan hasn't. This was my 32 pound pumpkin that I grew last year. I was so looking forward to growing an even bigger pumpkin but the gophers won. Next year I am aiming for a 50 pounder, at least!
Oh! Do you wanna know what we did with the pumpkin after we had had it in my bedroom for 8 months? We harnessed it to a rope, Little Rita climbed up into a 40 foot redwood tree, and with a pulley system hoisted the pumpkin up there, and attempted to drop it for the big splatter! But guess what? It got stuck in the limbs of the redwood and so LR had to climb down and shove it off....it landed on the ground with an unsatisfying plunk but remained unbroken. I wish we had gotten pictures, the three of us were in hysterics over the sight of the giant pumpkin wedged 30 feet up in the air in the branches of a tree, that and we had worked so hard to tie this yellow rope around the pumpkin only to have it fail....hilarious!
Finally, Little Rita climbed up into her fort and we handed her the pumpkin which she then shoved over the edge! There we received good splatter! From those seeds we grew this years pumpkins that the gophers ate....sigh....
Have a lovely weekend!

Muscular Wench you are.....

Oh silly, silly me. Not only have I seen that second picture before, I even commented on it. I guess I am minus a few brain cells today for sure. I wondered why I had such a great idea. Now I know, it is because you already had that idea.

Thank you so much. That was wonderful to see (and see again).

I did a little poking around and it looks like I started to visit you about March of last year.

those pictures are terrific and i can just imagine the attempts to splatter the thing. too funny! so did you save seeds from the one the gophers attacked?