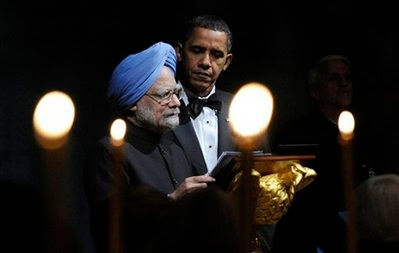 When Prime Minister Manmohan Singh met in Washington this week with President Barack Obama, the White House lavished attention on the unassuming, bookish Indian leader. There was a state dinner. There were movie stars. There was a chandelier-filled tent packed with powerful Americans chatting up powerful Indians. There was talk that the two nations had forged "one of the defining relationships" of the century.
(There was a party crashin' couple sportin a red saree and a tuxedo.....)

1 a : of or relating to books b : fond of books and reading
2 a : inclined to rely on book knowledge b of words : literary and formal as opposed to colloquial and informal c : given to literary or scholarly pursuits; also : affectedly learned

yeah, what was UP with the crashers?