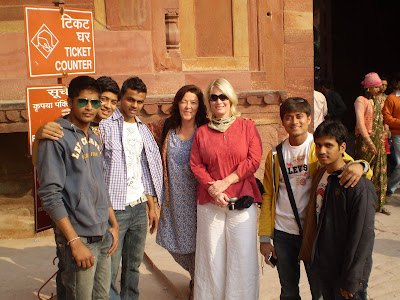 Here we are at Agra Fort hanging with handsome young men! Woo hoo!
So, one of the things that happens to me after I return from India is that I have lots of really weird dreams. I am so disoriented, and the jet lag is so bad, I just am out of my mind. In fact, I don't usually remember my dreams at all, but these are so weird they are unforgettable.
I thought I would share the two oddest dreams with you.
~
So, in this dream, Gary and I were out front of the Taj Mahal in a car which of course is total nonsense because you can no longer drive a car to the Taj! I was changing my clothes for some reason, but had only gotten the old clothes off. Suddenly, I am out of the car in only my chaddis (that's panties only, madam!) This was of course attracting way too much attention so I began running away but ran into the Taj grounds. But of course a police officer grabs me and suddenly I was in the Taj office in trouble because I didn't have any clothes on. Gary had my clothes, and why he didn't come with me I sure don't know. I was left waiting in the office alone, so then I escaped the Taj officers and went running back to the car, just in time to see Gary driving away! I began running down the street still in just chaddis looking frantically for Gary, when suddenly India turned into a suburban street in Florida.
Then I broke into someones house to get clothes and she caught me and called the cops! I managed to get away from her and began running down the street again, still mostly naked because I didn't get any clothes before being caught. Next thing I know I am in someones bed..I don't know whose, then one of my friends sons came into room to tell me that his mom had had another abortion (totally nonsense, no abortion in real life and I have no idea why that part was in the dream) then Gary finally shows up and I was of course furious at him for leaving me mostly naked at the Taj Mahal.
"Where have you been! I am now a fugitive from the law!"
"Why?", asked my runaway husband.
"Because I got caught running down the street in only my underwear!"
And he said, looking quite surprised, "why did you run down the street in your underwear?"
"Because YOU had my clothes, where did you go? Why did you leave me in the street with no clothes?"
To this he calmly replied, "Oh, I waited for you and you didnt come back so I went out for a couple of beers!"
Then I woke up. 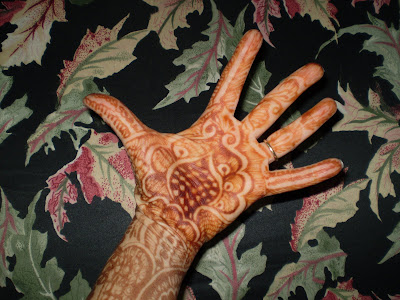 Then there was this one.
~
I was in the Hong Kong airport and my flight was delayed so the airport hostess was bringing me to a room to sleep in. "How wonderful", I thought, "I can get some nice sleep before that 12 hour flight to San Francisco." The room was dark, and the hostess turned back the covers for me and I got in. Just as I began to relax I noticed there was a dark skinned man with no shirt lying beside me in the bed. I think he was Indian but might have been Chinese.
"Hmnnnnnnn, something is not right about this", I thought, "why is there a strange man in my bed?"
I continued to lie there and even tried to sleep but couldn't get that thought out of my mind that this man should not be here, and where the hell were his clothes?
"This is wrong, this is just wrong", I thought.
This is when I began to wake up, and realized that I was in my own bed at home, and that man had suddenly turned into Mr Ratburn, with no shirt on.
Whew what a relief! 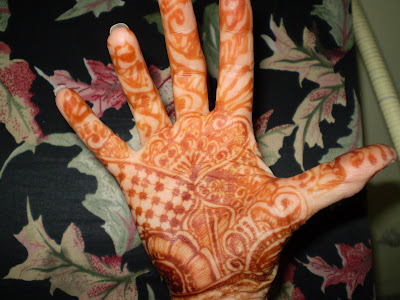 Of course another thing that happens when I get home is that when I am half awake, I say silly things like I did the other day. Mr Ratburn woke me up from a nap so that I didn't sleep all day long, and I mumbled something like, "so do we have time to get to work in Bangalore today?"
That is when I noticed Mr Ratburn staring at me funny like, and I said, "did I just say something stupid about Bangalore?"
To this he nodded.

Sitting in his overstuffed chair, taking notes on a clipboard, the shrink peers over the top of his glasses and says...
"May I see your chaddis"?

those are some seriously wacky dreams, madam!

So now I understand you're last comment on my blog about the best clothes in Goa is "no clothes at all" ;-)

Did not know my saying could drive you into such wired adventures - but by all means; dream on girl :-)